I have been saying for a while now that when I have my next gathering I will blog about it show what vegans can eat and what options there are at barbecues etc, the first picnic went so well all the food was gone before I could take any photos and I do have another picnic coming up very soon with my friends so will definitely attempt to get some snaps before the eating commences.

Last week my friend hosted a gathering for all of us girlies and we have a wonderful barbecue with plenty of vegan options including my signature rice and peas as well as burgers, sausages, salads, potatoes and plenty of gin! It was when the weather was starting to slow its roll on the heat blast and we were able to sit outside without fear that us or the furniture would melt, which mean it was the perfect night for a dinner with plenty of laughter and lots of love.

Not all of my friends are vegan or even vegetarian but one of the reasons that I love them so much is because they are always willing to try out my vegan options, which really makes me so happy! It made me even happier that they took the leftovers for lunch the next day, in fact, that is one of the reasons I decided to blog about it because of well it went down.

My friend had some lentil burgers I believe she said were from Aldi that we threw on the barbecue with some Linda McCartney’s sausages, Meditteranean vegetables and frozen corn. These were already in a short matter of time and while we were waiting for these to cook we devoured a tub of chilli and garlic mixed olives, red pepper dip and houmous with baby pittas. The baby pitta bread worked out so well because they were much easier for everyone to grab rather than having to rip up or cut the bigger ones and they were just in the oven for 5 minutes to heat through and they were ready.

TOP TIP: If you want to cook corn on the cob on the barbecue buy it frozen because when it starts to defrost on the barbecue the water turns into steam and makes it very juicy and succulent.

We had some spicy baby potatoes, that went really well with the beetroot and salad as they were so delicious, spicy but not too spicy, these were also from Aldi and were less than £1.50 I believe for enough to feed 4 easily. 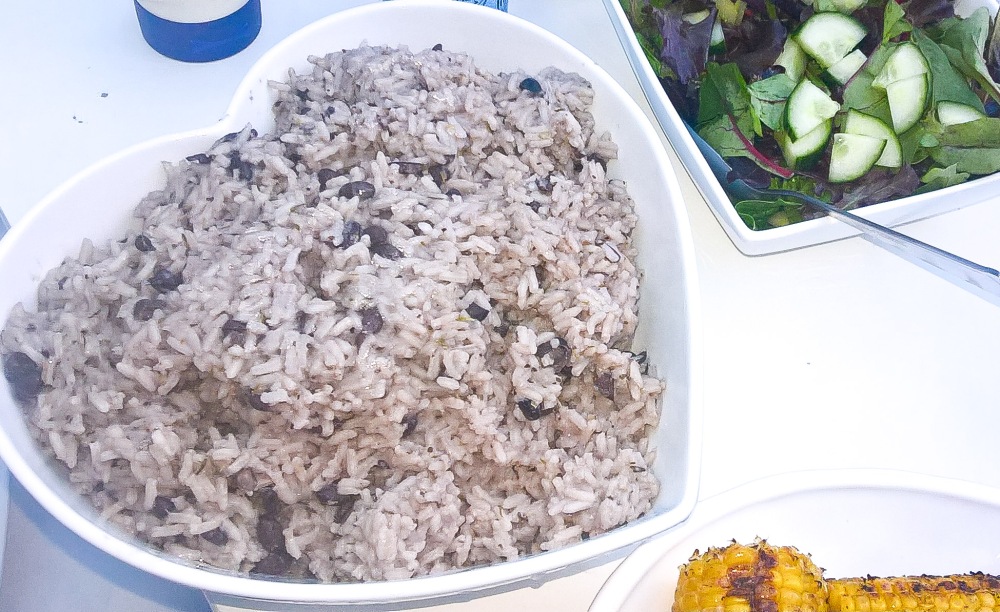 For salad we had simply mixed leaves with cucumber, beetroot salad and an orzo and sundried tomato salad all from Aldi, in total we spent just over £10 on all the salads, bread and dips in Aldi, which was really cheap considering it was more than enough to feed the 4 of us.I made a cauldron-sized amount of rice and peas which went down really well and was able to take enough home for lunch and dinner the next day.

All of this paired with gin and tonic with an exploration of botanicals, that my friend had waiting to be added my favourite was the juniper berries with hibiscus and orange peel, this was a delightful drunk to sip whilst giggling with my favourite people in the whole wide world and watching the day turn to night, before a shameful game of darts and then a curl up on the sofa with a chick flick. My idea of a perfect evening with wonderful people and delicious vegan food!